The Missing Sister by Dinah Jeffries 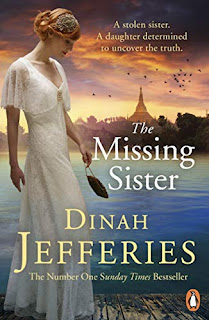 Belle Hatton has embarked upon an exciting new life far from home: a glamorous job as a nightclub singer in 1930s Burma, with a host of sophisticated new friends and admirers. But Belle is haunted by a mystery from the past - a 25 year old newspaper clipping found in her parents' belongings after their death, saying that the Hattons were leaving Rangoon after the disappearance of their baby daughter, Elvira.

Belle is desperate to find out what happened to the sister she never knew she had - but when she starts asking questions, she is confronted with unsettling rumours, malicious gossip, and outright threats. Oliver, an attractive, easy-going American journalist, promises to help her, but an anonymous note tells her not to trust those closest to her. . .
Belle survives riots, intruders, and bomb attacks - but nothing will stop her in her mission to uncover the truth. Can she trust her growing feelings for Oliver? Is her sister really dead? And could there be a chance Belle might find her?

Dinah Jeffries once again whisks us off to the other side of the world and another time.
In this book we are in Burma both in 1921 where we hear Diana's story and in 1936 where we hear Belle's.

Belle's father has died and she is travelling to Burma to take up a job singing in a hotel.
She also has another reason for choosing Burma. It is the place where her parents lived and where she has just found out her sister mysteriously disappeared when she was three weeks old. Her mother Diana was blamed partly because she had post natal depression and was acting strange. Her parents moved back to England soon after.
Belle didn't receive much attention from her mother as a child then one day her mother was gone and a few years later her father told her Diana had passed away.
Diana's story is heartbreaking. Losing her baby takes over her life and no one understood about post natal depression. Her husband is only sympathetic for a limited time then Diana has to face the consequences of what he decides for her.

Once Belle begins her quest to find out what happened to her sister various people appear to want to help her but she doesn't know who to trust. Are they helping or are they trying to prevent her from finding out the truth.
This was definitely a page turner. There seems to be danger for Belle at every corner.

I was swept up with the descriptions of Rangoon and Mandalay. The markets, the crowded streets and the feeling of unease as Belle walked them.
Belle seemed quite naive at first but gradually she became a strong woman who would stop at nothing to find out the truth. She had choices to make. Did she trust Oliver or Edward. Both seem willing to help but as she is warned off the one she is falling for, does she follow her heart or her head?
I always enjoy a Dinah Jefferies book and this one lives up to my expectations. A really good read.

Kindle edition out today with paperback out on 21st March. Find it here
at February 28, 2019