I Know Where She Is by S.B. Caves 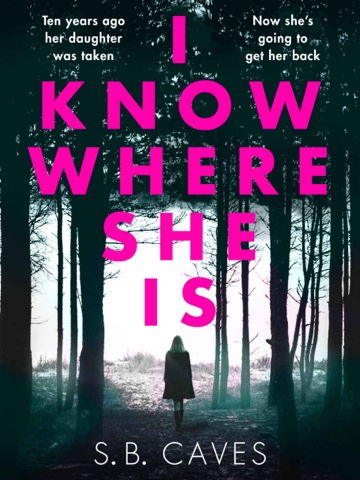 On the tenth anniversary of her daughter Autumn's abduction, Francine receives an anonymous note containing just five words: I KNOW WHERE SHE IS
When a young woman approaches her the next day claiming to have sent the letter Francine wants to dismiss it as a cruel, twisted joke.
But the stranger knows things that only Autumn would know.
It soon becomes clear that Francine must go to dark places in order to learn the truth about her child’s kidnapping.
She will discover that danger comes from unexpected sources. She will do things she never imagined herself capable of.
But will Francine get her daughter back......or is it too late.

Well that was a traumatic read. At one point I found the subject matter quite disturbing and put the book down thinking I couldn't read anymore. I picked it back up again...I was hooked and I had to find out what happened next.
I'm not going to say anymore about the story,the synopsis says enough. The book was fast paced,never a dull moment.
Francine,the mother shows us the power of a mother's love. Her belief that her daughter Autumn is still alive after ten years and the feeling that she can feel her near is so powerful.
I found the disturbing parts a bit unbelievable but who knows what goes on in some parts of the world, there are many people with strange ideas of right and wrong.
Most of the book had me on the edge of my seat,biting my nails and unable to stop reading. Although I couldn't read it in bed as it would have kept me awake all night.
What a great debut novel but why isn't it out in paperback? I think it will be,must be soon.
I'm actually a wimp when it comes to reading thrillers or tense stories so I'm pleased I got to the end of this book. I have a question for the author if he reads this, " We know this story is not over so can we please have a sequel?" Give me another year and I will have plucked up courage to read it.
Go on ...read it if you dare!
Can't believe this book is 99p for kindle.
https://www.amazon.co.uk/Know-Where-She-breathtaking-thriller-ebook/dp/B0744BFRT8/ref=sr_1_1?ie=UTF8&qid=1503669206&sr=8-1&keywords=I+know+where+she+is

The Trouble With Words by Suzie Tullet 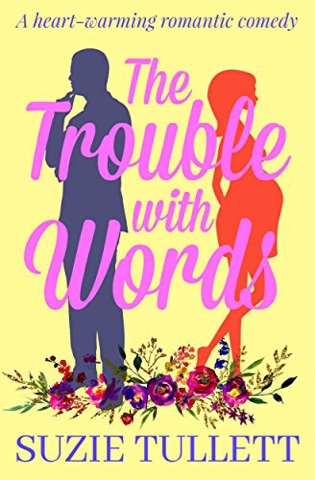 Annabel is desperate to have a baby – there’s just one problem. She’s single and after losing her husband in a hit and run accident, she’s just not ready for another relationship.
Dan is on the hunt for the perfect woman but when his mother drops a bombshell, he starts to feel the pressure.
When Dan and Annabel’s worlds collide, both start to think that maybe they’ve found the solution to their problems. But things are about to get messy.
Can Dan and Annabel get what they want?
Both will soon find out that the trouble with words is finding the right thing to say.

Annabel wants a baby,which is what her and her husband planned to do before he died but now Annabel wants to find a donor and do it by herself. Like any non sensible person she grabs the first decent man she sees in the pub and asks him to oblige. Luckily it turns out that Dan is a decent man.

No one else thinks this is a good idea as Annabel is still in love with her husband but can Dan change that?
I enjoyed this story, it was very bittersweet. It was the story of a widow moving on from the death of her husband. Annabel still went to her husband's grave to tell him what was happening in her life, but it's lonely when you get no answer back.
I didn't think Annabel was doing the right thing in looking for a sperm donor as it meant she was giving up on finding love again.

I think Dan was lonely too, he still lived with his mother never finding the right woman who lived up to her expectations. She was desperate to get him together with her old friend's daughter and no one else would do.
I didn't like Dan's mother at all through most of the story I thought she interfered with her son's love life too much and I couldn't understand why he didn't get his own place to live. I liked her more towards the end of the book when she seemed to soften.
There are many funny moments with Annabel and her sister and her friend and some parts are really sad when she speaks to her deceased husband.
The question seems to be,when can you move on? When can you start to want the things that make you happy? And can you do it without the person who you thought was the love of your life?
This book makes you ask all these questions and more.