No Place For A Lady by Gill Paul- With short extract 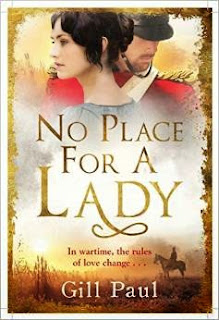 IN WARTIME, THE RULES OF LOVE CHANGE …
1854. Britain is fighting a gruesome war.
There has been no news of Lucy Gray since she eloped with handsome and impetuous Captain Charlie Harvington and embarked with him to the Crimea.
Dorothea Gray will risk anything to heal the rift with her little sister and bring her home safe. She determines to join Florence Nightingale and the other courageous women travelling to the battlefield hospitals as nurses.
She will not rest until she finds her sister.
Lucy, however, is on a very different journey, a journey through tragedy, trauma and true love.
But neither sister is prepared for the challenges they will face, the passion they will each taste and the simple fact that they might never see one another again …
A spellbinding and exquisite tale of courage, adventure and love. Prepare to be swept of your feet.

I'm part of the blog tour for Avon Books UK. I must apologize as this should have been published on Saturday but I've just moved house and have had no internet.
I have been so looking forward to reading this book. I enjoy reading a fiction story that also educates me and this is one like that. I had no idea that officer's wives went with their husbands to war and many ordinary soldier's wives went too. They cooked for their husbands,washed their clothes and acted as their nurse if they were injured. There didn't seem to be much medical aid for the men until Florence Nightingale went to the Crimea with her specially picked group of nurse. She came across in the book as being a formidable woman with a warm heart.
Lucy is a very likeable character and in the beginning her sister Dorothea was not. As we started to hear Dorothea's story I liked her more and more.

As Dorothea travels to the battlefields in the hope of finding her young sister the two keep missing each other. I kept willing them to be in the same place at the same time but it didn't happen for a while. Dorothea has been taking care of her aged father for years as well as bringing up Lucy when their mother died. Going abroad is like a release for her and she feels free.
Lucy's husband Charlie seems to be popular with the men and Lucy revels in this until something happens and Lucy finds herself friendless.
This book is a great read. I found myself turning the pages faster and faster. We really have to respect those woman who followed their husbands to a war that raged so far away from home. The life they experienced there was so different from their normal existence and they were always in danger of attack. The book had a good ending but Lucy makes a decision which at first I was shocked at but the more I thought about it she probably made the right one. I shed a few tears. This is one of those books I didn't want to end and it took me a while to pick up another book as I wanted to read one along the same lines as this one.

I have been lucky enough to be given an extract from the publisher to share with you. This is when Lucy meets Charlie for the first time.

"She picked a Mozart lieder that suited her first soprano voice. Her singing teacher was critical of her pronunciation of the German lyrics, but she was fond of the pretty melody. As she was singing, she heard the drawing-room door open and glanced up to see Henry Pendlebury standing in the doorway with a friend, a very handsome friend, kitted out in a royal blue tunic with gold braid draped over the chest, who was staring directly at her. The attention made her sing a little more sweetly, play a little more precisely, while she felt herself flush at the unexpected audience. When she finished, all clapped heartily and Lucy bowed her head.

‘Please don’t stop. I could listen to you forever,’ the stranger said. It appeared he couldn’t take his eyes off her.Henry Pendlebury laughed. ‘Miss Gray, meet my army colleague, Captain Charlie Harvington. Charlie, this is Miss Lucy Gray.’

Charlie came forward to take her hand. He raised it to his lips, kissed it, then fell dramatically to his knees. ‘I declare in front of all witnesses here present that I volunteer to be Miss Gray’s willing slave and do her bidding for as long as she will tolerate me. Please, Miss Gray, tell me some service I might perform for you. I ask nothing in return but the honour of being allowed to remain in the presence of such breathtaking beauty.’
Lucy laughed, startled by his unconventional forwardness.

‘Very well. I should like a cup of tea to wet my throat after its exertion.’ There was a pot of tea on a tray by the fire and Charlie bounded over to fetch her a cup, enquiring carefully about her taste for cream and sugar.
‘Now I should like you to bring my shawl,’ she said, enjoying the game with this lively stranger. She noticed a disapproving look pass between Mr and Mrs Pendlebury and knew she was pushing the boundaries of propriety but couldn’t help herself.

Charlie fetched her shawl and as he held it towards her their eyes met. His were a startling blue, an unusual combination with his chestnut hair. He was smiling, but behind the smile she could sense something sad about him. She felt a tug at her heart and knew in an instant, all joking aside, that she was going to fall in love with him, and he with her.

It was as simple as that. When she rose to leave, as the hour was approaching when she must change for dinner, Charlie escorted her to her carriage and asked if he might call on her the following morning.
‘What about me?’ Henry called from the front door. ‘Am I to be forgotten so readily, Miss Gray?’
‘You must come too,’ she insisted. ‘Of course you must.’

But it was Charlie she had eyes for now. It was what the French called a coup de foudre, a deep-rooted, certain knowledge that they belonged together. "

No Place for A Lady is out in paperback or for kindle download which is at an incredible price of 99p.
http://www.amazon.co.uk/No-Place-Lady-Gill-Paul-ebook/dp/B00XB7YJOC/ref=sr_1_1?s=books&ie=UTF8&qid=1434315312&sr=1-1&keywords=gill+paul
If you enjoy historical fiction or non fiction check out Gil Paul's page on Amazon as she has written many.
http://www.amazon.co.uk/Gill-Paul/e/B0034Q4UUI/ref=dp_byline_cont_pop_book_1

Email ThisBlogThis!Share to TwitterShare to FacebookShare to Pinterest
Labels: Gill, No Place For A Lady, Paul

The Lost Art of Keeping Secrets by Eva Rice. 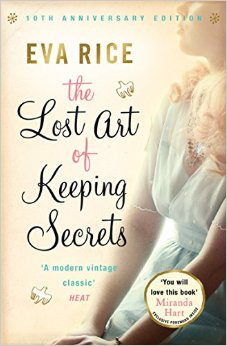 Set in the 1950s, in an England still recovering from the Second World War, this is the enchanting story of Penelope Wallace and her eccentric family at the start of the rock'n'roll era. Penelope longs to be grown-up and to fall in love, but various rather inconvenient things keep getting in her way. Like her mother, a stunning but petulant beauty widowed at a tragically early age, her younger brother Inigo, currently incapable of concentrating on anything that isn't Elvis Presley, a vast but crumbling ancestral home, a severe shortage of cash, and her best friend Charlotte's sardonic cousin Harry...

I missed this book when it was first published in 2005 and it was a Richard and Judy book read at the time. Now ten years later it has been re published with a new cover and a short story and the end which could be called a prequel.
I have to begin by saying it took me a while to get into this book and begin to enjoy it. Halfway through the book I started to become more interested in it.
Penelope, her mother and her brother live in an old country house estate. They have not long moved back into it as during the war it was requisitioned by the army and they moved into the Dower House.
Their house was not looked after by the army and  is falling to pieces and costing them every penny they have. Penelope's widowed mother has not recovered from losing her husband and does not seem to be much use to anyone.
Penelope meets Charlotte while waiting at a bus stop and accompanies her to her Aunt Clare's house for tea. Charlotte is more worldly wise than Penelope and a friendship is formed . Charlotte has a brother, Harry who has split from his girlfriend. He persuades Penelope to pretend they are together to make his girlfriend jealous and win her back.
I thought most of the story was rather predictable and I was proved right. I did enjoy reading about post war Britain and it was written beautifully. There was a good satisfying ending which I thought rounded the story nicely.