Creature Comforts by Trisha Ashley plus an extract from the book. 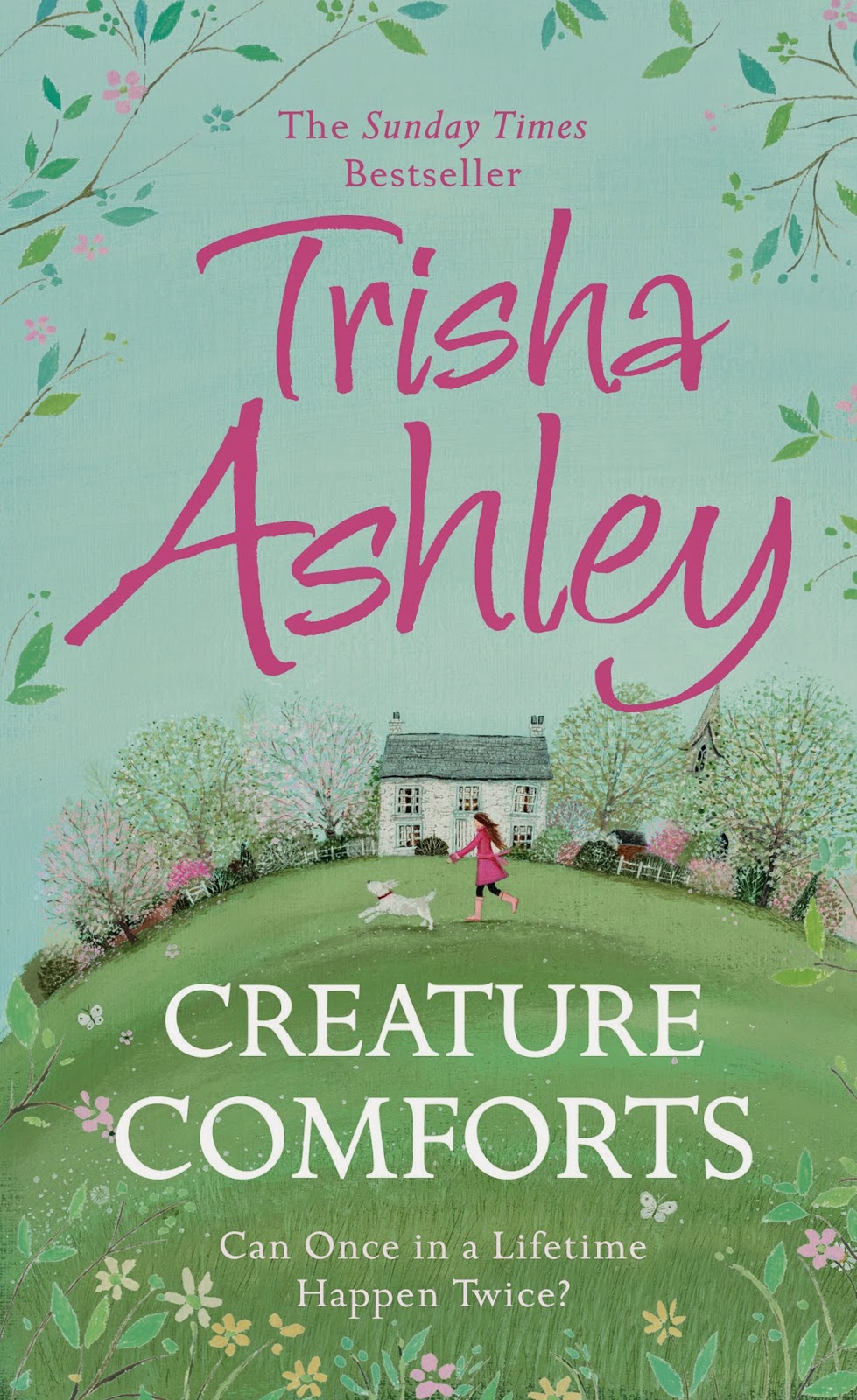 Creature Comforts is a gripping read about fate and second chances which will make you fall back in love with life.

Thirty year old Izzy Sweetwell has a peaceful life. She lives in the sleepy village of
Halfhidden with her aunt with her aunt Debo, who runs the local kennels, a home from home for waifs and strays in the area.

You couldn’t say that Izzy’s life is particularly exciting, but that’s just how she likes it, she’s bid farewell to a dramatic life since a terrible accident when she was a teenager and for now, she’s perfectly content with her aunt and the dogs in Halfhidden.

When she was a teenager, Izzy was involved in a terrible accident, involving various inhabitants of Halfhidden. As she sets out to discover what actually happened on the night of the accident, she realizes that her painful past is actually standing in the way of her future happiness. So when a handsome stranger comes to Halfhidden will she let love back into her life?

I'm delighted to be part of the blog tour for Creature Comforts and as such I have been given an excerpt from the beginning of the book for you to read and enjoy.
First my review.
I am beginning to love Trisha Ashley's books, I still have a few of her earlier ones to catch up with.
Izzy Dane is back in her home village of Halfhidden (wonderful name) after working in India setting up textile workshops for the women who live there. Nineteen years ago when she was sixteen she was involved in an accident that everyone thinks she is to blame for but Izzy has always felt that someone has not been telling the truth.
Trisha's books always have such wonderful characters, people you would love to have as a friend and neighbour with the odd baddie thrown into the mix. This book did not disappoint and I can't decide whether I want to live in Halfhidden or Sticklepond from another of her books.
Izzy's aunt Debo and her friend Judy have dog kennels full of dogs no one wants. As they take in more and more dogs could the future of the kennels be limited as it's clear that some people will stop at nothing to close them down.
Izzy has left her fiance when she discovers he's not the man she thought he was. Now with no fiance and no wedding to plan she returns home to the people who love her and to set up her online clothes business which is what she always planned to do.
Childhood friends Lulu and Cam have also returned to Halfhidden to set up businesses there and have a great idea of how to invite the whole of the village to get involved.
I enjoyed this story and the end came all too soon but maybe Halfhidden and Izzy and her friends will be re-visited again in another book?
There's love, lies, secrets, adorable dogs,ghosts, and a wayward mother all stuffed into one story, what more do you need?

Amazon for kindle also out in hardback and paperback

‘Is that young Izzy Dane?’ Tom gasped, still panting for breath, for he was somewhat beyond the age of sprinting up steep paths. ‘Eeh, she looks bad – and you shouldn’t have moved her with that head injury, Dan.’

‘Thought I’d better in case the car goes up – there’s an almighty stink of petrol,’ Dan said shortly, looking up. ‘She was in the front with Harry and they had the worst of it – my lad and the Ferris girl were in the back and got themselves out.’
He nodded at Izzy. ‘If you think she looks bad, you should see Harry.’
‘Like that, is it?’ Tom got out his own torch, took a look inside the car, and came back, shaking his head.
‘Poor lad,’ he said. ‘But he’s in the passenger seat so ... are you saying young Izzy was driving? She’s not old enough to have her licence yet.’ He took off his old tweed jacket and laid it over the still figure on the grass, after checking her airways were clear and she still had a pulse.
‘She was in the front next to Harry – it’s clear enough what happened.’
‘Your Simon always drives them back from the pub, though, doesn’t he?’ Tom said. ‘On account of being teetotal.’
‘Not this time.’
‘This is all Izzy’s fault!’ Cara exclaimed hysterically, the wadded hem of her T-shirt held to her bloody face. She’d scrambled up the bank and was sitting next to Simon, who was still slumped with his head in his hands. ‘I’m going to be scarred for life – and Harry?’ Her voice rose shrilly. ‘What’s happened to Harry?’
‘It was Howling Hetty’s ghost that did it!’ Simon slurred, looking up with a face as milk-pale as any wraith, and then he threw up copiously into the grass next to him, narrowly avoiding Cara.
Tom blanched and said uneasily, ‘Nay, never say you’ve seen her!’
‘Of course he hasn’t! Simon, pull yourself together and ring for help, if you haven’t already,’ Dan snapped. ‘What’s the matter with you?’
‘Teetotaller or not, he’s drunk,’ Tom said, fishing a mobile phone the size of a brick out of his trouser pocket and dialling 999.
‘I’d better go down to the Lodge and tell them...’ Dan stopped, glancing at Izzy, still lying unconscious on the grass. ‘No need, they’ll have heard that damned horn and be here any second,’ Tom said. ‘The whole of Halfhidden will have heard it.’
And he was right, for the sound echoing urgently up and down the valley was a siren for a disaster that had ended one young life and would forever change those of the other occupants of the car that night, but most especially Izzy Dane's. 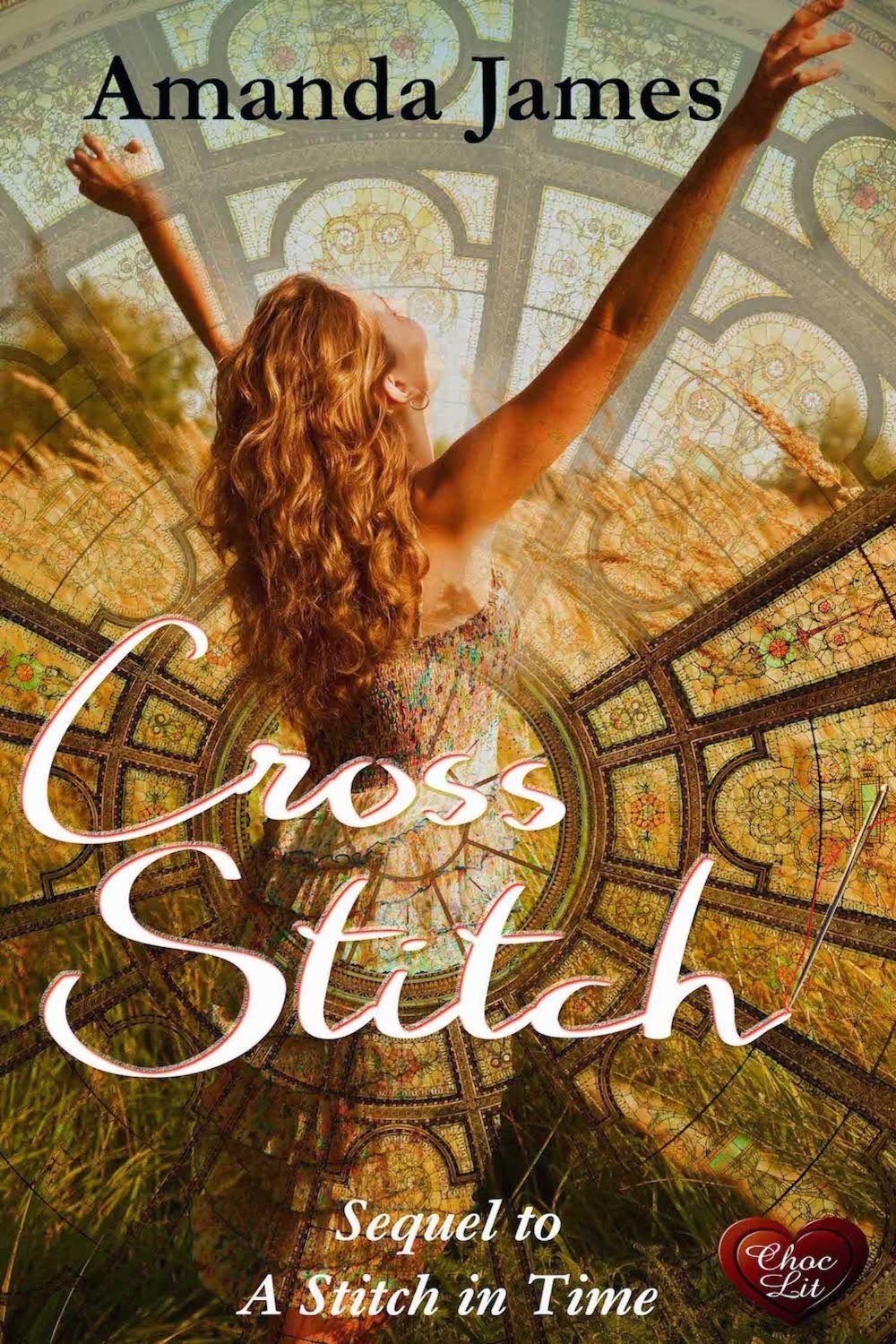 It should be the happiest day of her life. Despite past heartache, Sarah Yates is finally marrying her true love, John Needler.
But Sarah and John can’t pretend they’re an ordinary couple. They’re time travellers and where time travel is involved, nothing runs smoothly. One minute Sarah is saying her vows and the next she is hurtled back in time to a country that is on the cusp of war, and into the company of the bad-tempered Veronica Ratchet.
Newly-wedded bliss is certainly not on the cards for Sarah as events see her travelling from the British punk era to 1950’s America. And even when she returns home she can’t escape Veronica.
But when the past and the present collide, that’s when the real problems start …

When I managed to take my eyes away from the stunning cover, starting this book was like putting on a comfy pair of slippers. This is the sequel to Amanda Jame's book  A Stitch in Time and I had no trouble getting right back into the story again.
It's John and Sarah's wedding day but as they're both time travellers who are regularly sent back in time to fix something that's about to go wrong you just know that the wedding is not going to go smoothly.
Usually Sarah knows where and when she will be travelling but in this book everything is different and Sarah is whisked away without even John knowing about it. There is a reason for this but I don't want to spoil the surprise.
In Cross Stitch we see more into Sarah and John's private lives and those of their families. The introduction of Veronica added to the story as she was both frustrating and comedic.
I enjoyed this book so much I didn't want it to end. I wanted to see Sarah in many other time travelling places but during this book I was also a bit worried about her, again for reasons I cannot divulge.
Any fans of Quantum Leap or Time Travellers wife will enjoy these books but Amanda James has her own unique take on time travel that has never been done before. So much research must need to be done for each time period Sarah enters and the author seems to capture the era and make you feel you're part of it.

This could be read on its own but I would recommend you read the first one which I reviewed here
I'm not one for reading books about time travel as I find them too complicated but this is Chick Lit time travel and easy for anyone to read.
I think we will be reading more in this series as it's a story which could be expanded into a few more books.
Amanda is a very diverse writer and having read all her books I can say you never quite know what subject she's going to write about next, she always surprises.

Amanda Jame's Time Traveller book 1 / A stitch in time is on Kindle here for £2.99
Book 2 Cross Stitch is on Kindle  here for 99p
With both books being less than coffee and a cake think of all those calorie you'd save!
at February 17, 2015 1 comment: