The Separation by Dinah Jefferies 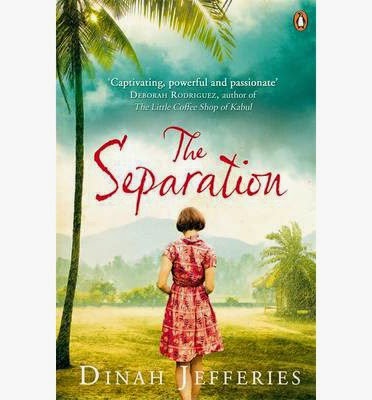 A country at war with itself, a family divided and betrayed, a bond that can never be broken...Malaya, 1955. Lydia Cartwright returns from visiting a sick friend to an empty house. The servants are gone. The phone is dead. Where is her husband Alec? Her young daughters, Emma and Fleur? Fearful and desperate, she contacts the British District Officer and learns that Alec has been posted up country. But why didn't he wait? Why did he leave no message? Lydia's search takes her on a hazardous journey through war-torn jungle. Forced to turn to Jack Harding, a man she'd vowed to leave in her past, she sacrifices everything to be reunited with her family. And while carrying her own secrets, Lydia will soon face a devastating betrayal which may be more than she can bear...Dinah Jefferies was born in Malaya in 1948 and moved to England at the age of nine. She has worked in education, once lived in a 'rock 'n roll' commune and, more recently, been an exhibiting artist. She spends her days writing, with time off to make tiaras and dinosaurs with her grandchildren. The Separation is her first book.

Another amazing debut novel. Where have all these authors been hiding?
The prologue of this book is heartbreaking. I always finish reading my books by going back and re-reading the first chapter and having read the story the prologue seemed even more heartbreaking.

We watch as Lydia goes through one of the worst times in her life, trying to find her husband and children. She is given so many false leads and hope along the way that I just wanted to shout the truth to her.
We know where her children are and they are suffering just as much as they miss their mum terribly especially the oldest girl Emma.

Malaya in 1955 was a very dangerous place to be especially if you were British. The Emergency as people called it was at it's peak and no one could be trusted. A woman travelling alone through the jungle and surrounding areas was in very real danger but Lydia was so worried about finding her children that danger didn't enter her mind.
This book is full of intrigue,corruption and revenge. I never knew what was going to happen next or who I could trust to unite Lydia with her girls.
Emma's life without her mother was very unjust. Fleur the younger sister seemed to settle down well without her mum but because Emma was always asking her father questions he was taking his guilt out on her.
The author's descriptions in the of  the sights,sounds and smells of Malaya were so vivid they could only have been written by someone who had lived there and this goes hand in hand with strongly written characters to make the book a page turner.

Harriot and Cicely both old colonial types living the rich life thinking themselves better than everyone else and not interested in what was actually going on in the country they were living in. Lydia, trapped in a loveless married but desperate to find her husband and children. I worried what would happen to the little boy Maz who found Lydia and went on her journey with her.
I hoped for a happy ending but at times I thought Lydia would stop her search and settle for a life in Malaya, I'm not telling you what she decided to do you'll have to read it for yourself.

Although this is a fiction book it is based on the memories Dinah Jefferies and her family have of living in Malaya in the 1950s. I think Dinah's next book should be her own memoirs I'm sure they would make a good read.

The Separation by Dinah Jefferies published both in kindle format and paperback atAmazon uk
or from the Book depository free shipping worldwide. here
at July 11, 2014

Email ThisBlogThis!Share to TwitterShare to FacebookShare to Pinterest
Labels: Dinah Jefferies, The Separation