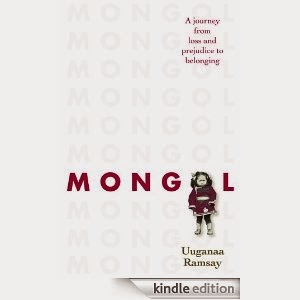 Uuganaa is a Mongol living in Britain, far from the world she grew up in: as a nomadic herder she lived in a yurt, eating marmot meat, distilling vodka from goat's yoghurt and learning about Comrade Lenin. When her new-born son Billy is diagnosed with Down’s Syndrome, she finds herself facing bigotry and taboo as well as heartbreak. In this powerful memoir, Uuganaa skilfully interweaves the extraordinary story of her own childhood in Mongolia with the sadly short life of Billy, who becomes a symbol of union and disunion, cultures and complexity, stigma and superstition – and inspires Uuganaa to challenge prejudice. Mongol is the touching story of one woman's transformation from outsider to fearless champion of love, respect and tolerance. It's a moving tribute by a remarkable woman to her beloved baby son, testifying to his lasting impact on a sometimes imperfect world.

A few years ago I was directed through Twitter to a blog I hadn't seen before. The writer of the blog was Uuganaa and the blog was full of letters written to her baby boy who had sadly passed away. Uuganaa had found writing letters to him a way of staying in touch, of telling him about his family, his brother and sisters and of how very much he was still loved by them all. Of course you can't leave the blog without tears but I was also drawn back week after week to read them.
I left comments on the blog and Uuganna replied and we eventually found that she lived not very far from me, I live in Glasgow and she lives "doon the waater" (at the seaside) so eventually we met up and that's when I found out about her desire to write a book about her life in Mongolia and her baby Billy.
She told me that she had discovered that every book written has a copy stored in the British library and this was to be her way of ensuring Billy's memory would live on. She sent me the first few chapters of her book and I just knew it would be a book that people would want to read.

You might think this is a very sad book and yes, there are parts which are very sad as we share Uuganaa and her families journey but we also learn all about life in Mongolia and what it was like for Uuganaa to travel across the world, learn a new language and start a new life first in London and then in Glasgow. I enjoyed learning of what life is like growing up in Mongolia,living and sleeping in a one room yurt.  I laughed when hearing of her meeting her husband who was then her boyfriend outside Boots in town. Uuganna was left standing outside a shoe shop that sold boots as she had no idea that,"Boots" was the shop she had to meet him at.
Uuganaa rode horses to herd sheep,distilled vodka from goat's milk, gathered cow dung for fuel and lived in a yurt. I shivered reading about the 360 km trip she had to make in a truck at night in temperatures of -30.
She was tavelling home from her school for the holidays wearing five layers of clothing,a pair of tights,three pairs of woollen leggings,jeans,a few pairs of socks and a sheepskin deel. Winters in Scotland must seem very mild compared to that. 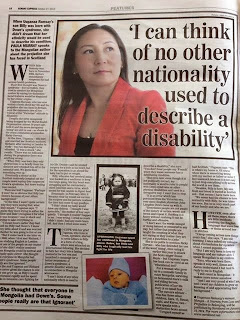 When Uuganaa's third child is born she has no idea that anything is wrong,she is then told he may have Downs Syndrome, the doctor changes his mind and says they were confused because of his ethnic background and Billy does not have Downs. The family are so relieved but the doctors change their mind again and confirm that Billy has Downs Syndrome. I can't begin to imagine how that feels but Uuganaa explains in her book how her family coped.
As well as having her book published Uuganaa wants to stop the misuse of  the word Mongol. Children who have Downs are not Mongols, people who come from Mongolia are Mongols and are very proud of it. I don't know where it started but comic Ricky Gervais is one who has promoted it's use and followed by schoolchildren. It's use has to be stamped out and children educated about what a Mongol actually is. Uuganaa is working alongside the Downs Syndrome Association both in the UK and Mongolia to get the message across.
A few of Uuganaa's letters to her son Billy are in the last chapter of her book but you you read more of them here  http://www.billybuuz.blogspot.co.uk/
What better day to launch the ebook of Mongol than today, International Human Rights Day. The paperback is released on 16th January.
I am proud to know Uuganaa Ramsay and to have read her wonderful memoirs. 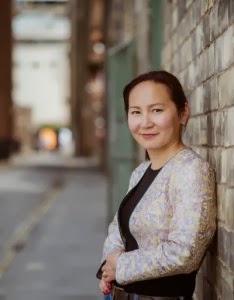 Uuganaa Ramsay was born in Mongolia and grew up in a yurt, living a nomadic life eating marmot meat and distilling vodka from yoghurt. After winning a place on a teacher-training course she came to the UK, and now lives in Scotland. Uuganaa was named as Woman of the Year for Mongolians in Europe 2012 by the Association for the Developement ofMongolian Women in Europe.
She wrote Mongol with the help of the Janetta Bowie Chalice Non-Fiction Book Award from the Scottish Association of Writers. It is her first book.
Amazon.co.uk
Amazon.com
Paperback pub 16th Jan The Book Depository with free shipping worldwide
at December 10, 2013