The Second Life of Amy Archer by R S Pateman 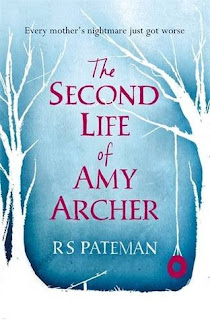 Ten years ago she disappeared without a trace...now she's back.

On 31st December 1999, ten-year-old Amy Archer went missing from her local playground. Her body was never found and the lives of her parents, Beth and Brian, were torn apart.

On the tenth anniversary of the disappearance, Beth is alone, still struggling with the enormity of her grief and the horror of not knowing the fate of her only child. But the fear and confusion have only just begun, and Beth's world is turned upside down when a stranger knocks on her door, claiming to know what happened to Amy.

Beth is introduced to a little girl who is the uncanny double of her missing daughter, who knows things that only Amy would remember; the name of her favourite toy, the place where she scratched her initials, what Beth likes for breakfast. But this can't be Amy, she hasn't aged a day...

Now Beth is forced to question everything she has ever believed in, and push her faith and her sanity to the limits, if she is to find out the truth about what happened to Amy.

Every now and then you read a book that you just can't put down,this is one of those books.
I read it in two days, every little chance I had. It is a large sized paperback and the print is quite big so this helped me get through it quickly but now I want to re read it again just in case I missed something.
The book opens as  Beth is laying flowers at the playground where her ten year old daughter Amy went missing ten years ago. These few pages describing the scene through Beth's eyes hooked me.
Beth relives the story for us of  the nationwide search that took place and the newspaper and TV coverage.  Amy was never been found and Beth has never recovered from the tragedy, and while Brian, Amy's father has moved on with his life Beth is stuck, unable to move forward.
When a child of ten turns up at Beth's door claiming to be Amy, Beth refuses to believe her as Amy would now have been twenty but this child knows so many things about Amy's life that wasn't reported in newspapers that surely it has to be true.
What mother would not cling to the hope that somehow her child has been returned to her? Beth embarks on a journey to discover the truth,is this child really Amy?
I'm finding it so hard to write this review without giving away spoilers but there are so many on Amazon that I don't want to do the same. I read this book without reading any of them and I want other people to do that too.
The author tells a brilliant story from the point of view of a grieving mother.We don't get to know what the other characters think so we have to take Beth's word for everything. I suspected a few people through the book but I was wrong. I usually like my endings finished nicely and wrapped up with a bow but you won't find that in this book. Strangely I loved the ending it made me think about the story days later and I couldn't get it out of my head.I'm still wondering.
I was surprised to discover that R S Pateman is a man, I really thought I was reading a book written by a woman so well done Rob. This is Rob's debut novel and he has kindly agreed to be interviewed by Books With Wine and Chocolate, his interview will be posted after my holiday,as you read this I will be soaking up the sun on the beach.
I will also be running a competition for a signed copy of Rob's book kindly donated by him. If you would like a chance to win this join me then.
Amazon UK
Amazon.com
I have to give The Second Life of Amy Archer five stars.

Woman Walks into a Door by Rowan Coleman

Books With Wine and Chocolate welcomes Rowan Coleman who will tell us how buying her new book Woman Walks into a Door can help raise money for Refuge.

Help Rowan Coleman raise £10,000 for Refuge
On September 10th Rowan is publishing her novella Woman Walks into a Bar as an ebook for the first time. And 100% of her proceeds will be donated to Refuge.
Her goal is to raise £10,000 and you can help. All you have to do is buy a book, or two, and get your friends to buy one too. You’ll get a funny, romantic and touching summer read and you’ll be helping women you’ve never even met at the same time and all for the price of £1.59!

The story behind the story

Every book Rowan have ever written has meant a lot to her, but with her latest book ‘Dearest Rose,’ something really special happened when the real world and the fiction she loves to write collided.  It changed her as a person and a writer, forever.
She was getting ready to research her tenth novel, which with the help of her Facebook readers she decided should pivot around the theme of domestic abuse. It was a subject she’d touched on briefly once before, when she wrote a short novella as one of the first Quick Reads called Woman Walks into a Bar, which to this day remains one of the pieces of work of which she is most proud.
So she posted on her Facebook page asking if anyone had any personal experiences of domestic abuse, and any stories they might share with her in confidence.
She was shocked and amazed by the response; there were more than 200 emails waiting in her inbox the next day. Each story she read was horrific and frightening in its own way, giving her an insight into the secret lives of many women; lives that all too often remain hidden. Domestic abuse can happen to anyone - well educated wealthy women are just as likely to suffer as women from a working class background - but the one thing all those women had in common was that they were survivors. After years of being mentally and physically beaten down, they had managed to find the emotional strength, somehow, to break free and start again.
Now Rowan wants to do something that will help other women find that inner courage, and change their lives. 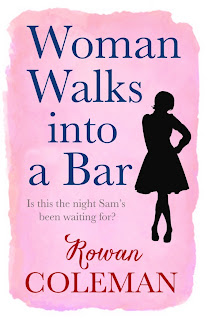 ‘Woman Walks into a Bar’ is the story of 28-year-old single mother Sam spends her days working in the local supermarket and her Friday nights out with her friends letting her hair down at the White Horse. Life hasn’t been easy for Sam and her daughter, Beth (who always looks on the bright side) but she’s always hoped that one day she’ll break free from her past and meet The One.
But after a series of terrible dates with men she’s met through an internet dating site, that have all been as awful as her daughter’s terrible jokes, she’s starting to lose heart - until her friends tell her they’ve set her up on a blind date. Sam’s horrified but finally she agrees to go. After all you never know when you might meet the man of your dreams; maybe Sam’s happy ending is just about to begin….
£1.59 Amazon Kindle UK

So, come on and join Rowan, and help to #supportafriend on September 10th. Every time you buy or pre-order ‘Woman Walks into a Bar’ you’ll be entered into a prize draw for fabulous prizes every week, while the #supportafriend #womanwalks campaign is running. On 10th September, tweet Rowan photos of you and your friends, tell her your ideas to support a friend, and why your friends mean so much to you.
You can be a best friend to someone you have never even met. You can help someone out there find the support they need to change their lives. 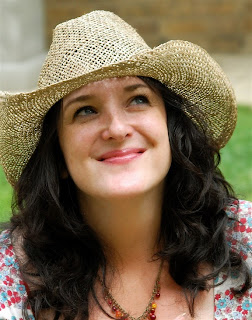 Rowan Coleman grew up in Hertfordshire secretly longing to be a writer despite battling with dyslexia.  After graduating from university she worked in bookselling and publishing for seven years before winning Company Magazine Young Writer of the Year in 2001.  Her first novel ‘Growing Up Twice’ was

published in 2002.
Rowan has gone on to write eight novels for women including the bestseller ‘The Accidental Mother, The Baby Group’ and ‘The Accidental Wife‘ and eight novels for children and teens including the paranormal adventure novels Nearly Departed and Immortal Remains under the name Rook Hasting. Her books are published around the world. She now lives in Hertfordshire with her family.